As you may have already heard, the world is going to end on December 21, 2012; at least according to the Mayan calendar. Old Spice has taken the social obligation of addressing this issue and with the help of a 90’s superstar, you can help conquer the end of the world.

Former Atlanta Hawks center, Dikembe Mutombo, is the star of the marketing campaign, in full 8-bit quality. Brand agency powerhouse Wieden & Kennedy Portland created this 4 and a half week challenge. The game is filled with social puns, relevant news, and witty responses. If you don’t find that funny, you’re going to at least love Dikembe’s voice in scripted nature. I’ve played the first two games, and found myself spending nearly 35 minutes on a single level.

Week One: The Great 2012 Dance Crisis
A South Korean dancer has swept the country and people are too busy dancing, that they are forgetting to vote. You, as Dikembe, fly through space getting ballots into hands of the nation on an Old Spice deodorant jetpack. Fast food chains and home improvement centers step in the way of your voters, but if you are able to dodge them, you take on the state of Ohio, “the most important state, for some reason”. Old Spice pokes fun at late ballots in Florida that don’t matter, but nails some hilarious voting jokes. 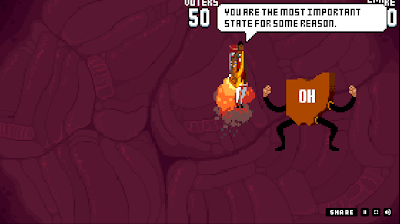 Week Two: Blurgpocolypse
Dikembe celebrates Thanksgiving with his sweater-wearing bear friend and a random turkey. Blurgies, a childhood toy, come back and are on sale for Black Friday, a sure sign of the end of the world.
In the middle of the level, the game seemingly stops with breaking news: HOSTESS is no longer creating delicious treats; another sure sign of the end of the world. After a short melody in honor of Twinkies and Ho-Ho’s, you take on a mega Blurgie boss with an assortment of dessert cakes. 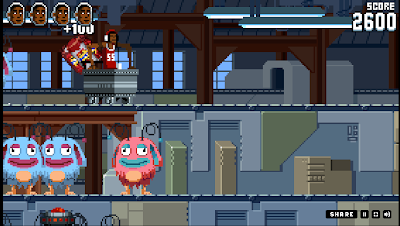 I give a lot of props to Old Spice and W+K on this campaign. While the flash game is loaded with endorsements and Old Spice products (though, 8 bit isn’t quite HD), the non-traditional approach to advertising wins my heart. The next time I walk into a convenience store to replenish my body wash, I will gladly support the guys who took the time to entertain me in the process rather than simply tossing a few commercials on during the football game.