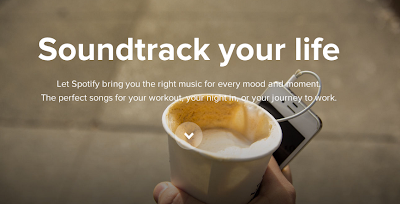 On July 14, 2011 a long-term relationship began; an intimacy unlike any other in my life.

This given Thursday brought Spotify to the United States, and into my life. It was the talking point in my interview for my current job, and the first subscription-service I picked up since graduating from college and having a disposable income. I had read a few reviews from their presence outside of the US and was pretty intrigued by the concept. Non-paying users could listen to pretty much any song out there as long as they are on their laptop and connected to the wifi. But even better, Spotify offers a premium service that offers constant access to music, shared playlists, and offline playback for uninterrupted windows-down singing anywhere in the country. Throughout the years, I’ve established playlists that range in context; from solo dance parties and breakup mixes to decision-making music and my followers’ favorite, “Soundtrack of  Life”. It’s allowed a music junkie like me to explore the indie artists of SXSW, rediscover the classics from my childhood, and dive into the abyss of legendary music from my parents era. Uniquely enough, I was talking in an elevator today about music sharing and met a janitor in his mid to late 50’s that uses Spotify nearly every single day.

Now, just under two years later, Spotify has released its first-ever paid advertising campaign, which aired tonight during The Voice. While Spotify has certainly hit a target market of opportunity with the fans of the television show, I can’t quite say the same about the commercial. With a living room scene that reminds me of the coding party house as seen in the Social Network, I just didn’t relate to the commercial; although I will admit that a few dance parties have emerged in my living rooms across the country thanks to Spotify. In my opinion, this spot lacks the true beauty of Spotify (accessibility) and fails to capture it’s unique separation from other music providers out there.

In the event that this ever gets read by someone over at Spotify or Droga5, the advertising network responsible for the commercial, here is some market research, at minimal cost, that I hope can help you create your next spot as you look to the future.

Here’s why I’m sticking to Spotify:
1. I have 114 playlists created and can’t imagine living without them.
2. I can collaborate with a conscious; sharing playlists, hosting mix challenges, all without illegally downloading music.
3. There is endless access that can playback in any tunnel, atop any mountain, and through any storm.
4. It allows me to create a presence amongst my friends and influencers with similar music tastes.

You can download Spotify for your computer, phone, or tablet device here. 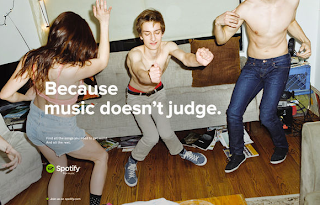