The San Francisco Giants challenged Giants fans to represent their team pride in the #OrangeOctober campaign. @SFGiants asked fans to post pictures in their Giants hats all around the city, with one lucky winner getting tickets to the first two games at AT&T Park. Now THAT’s a prize!
Being fairly new to the city, I have tried to be as intentional as possible to see every community and neighborhood out there. This place is filled with pockets of diversity. I took this competition and made it a personal challenge, beyond simply posting a fun picture in front of the Golden Gate Park or another significant San Francisco landmark. Instead, I took off early this morning and began hopping busses and trains to find out who is supporting the Giants during this Postseason run. Every time I saw a Giants hat, I introduced myself, showed them my cap, and asked to take a photo of them. My adventure started in the Outer Sunset, moved into the Inner Sunset, made a quick stop in Hayes Valley, stopped for lunch near Civic Center, walked to Potrero Hill, and now rests in the Mission. I’ve covered many streets of the City and loved every single interaction that I had, even those that ignored me or looked at me like I was crazy (I suppose I can be at times). The fans are on-fire for the weekend, one of the busiest in the year for the City.
Here are just a few of my favorite interactions with Giants fans in their October Orange. 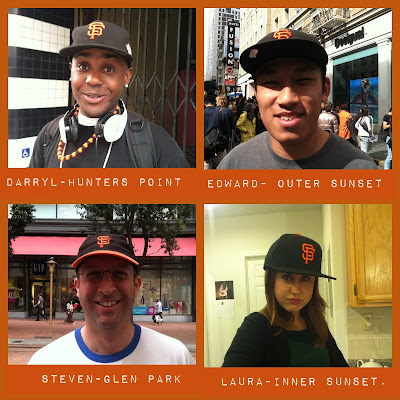 Darryl was awesome! I met him walking down the street. He was crazy excited about the postseason and said he has even been to a playoff game before. I asked for advice if I am able to make it to the games this week. His response: “have fun!” Seems easy enough.
Edward was waiting in line outside of UNIQLO, which just opened up this morning. He and his friends are all Twitter users and they were stoked to hear that his photo was going to end up on Twitter.  Edward keeps his sticker on his hat, something I could never pull off myself.
Steven from Glen Park was waiting in line for a bus when I talked to him. He and his friend asked about this week’s schedule as they hadn’t heard about game times. Thanks to Twitter, I knew the game start times that were announced this morning, so I passed along the good news, discussed the one-game Wild Card playoff that the Giants don’t have to worry about, and shared a high five.
Laura didn’t have a hat, but I loved her swagger. She just had the perfect look and enthusiasm, so I let her borrow mine. After seeing the picture, maybe I should have just let her have the hat, she owns it better than I do.

What I love about San Francisco isn’t just the great food, or even the sports allegiance. It’s the incredible community vibe that comes from talking to strangers. After 5 hours of meeting new people, I made new friends and connections. I shared my story and heard even more along the way.  I even had a chance to tell some people about the recently announced game times for the weekend. To Bryan Srabian and the rest of the San Francisco Giants organization, I thank you for creating this opportunity. I don’t know what you expected to come out of it, but you’ve opened up an opportunity for me to meet new friends, explore the City, and catch on to the heritage and pride that comes with the Giants Orange and Black. Now, I’m just hoping that some Postseason baseball comes next. 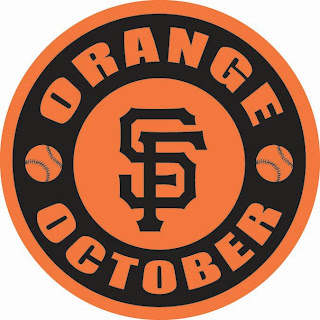