For seven years, I’ve spent the time leading up to my birthday to reflect on what is ahead. The whole concept of creating a bucket list on my birthday was my response to failing miserably at new year’s resolutions and needing documented accountability to myself. Looking at the lists through the years, I notice quite a difference. I travel significantly less and it feels like I’m doing a bit more adulting. For example:

Preparing for this next list has felt much different. At first I thought that maybe I was in denial that the next number is 30. As I was entering into my 20’s, the age of 30 was a monumental moment as I had a lot of goals aligned to it. No need for the gritty details, just know I was the typical privileged white kid that expected to have a family, high-salary job, and house with the fence. Instead, I find myself at 29, single, renting with a roommate, and still figuring out a lot about myself. But to say I’ve come to terms with my current situation is an understatement. I’m learning how to love myself and to do it well. I’m learning how to live in a way where planning and strategizing every single move isn’t a requirement. And to be honest, it’s a lot more difficult than I ever imagined. My lifestyle according to social media tends to appear a bit more radical than reality; that’s because I’ve developed a career in content and storytelling. And while I’ll never fear a last-minute planned trip out of town, just know that my mind is always moving at a million miles an hour and I’m always considering the next move before we get there.

The week leading up to my birthday I found myself sleeping very little and working more than ever, in preparation for a snowboarding weekend in Colorado.  I told myself that I’d write it on the plane ride out. Instead, I responded to emails and caught up on Twitter. Classic. But after the first night in Winter Park, I oddly felt no desire to open my laptop, which is extremely rare for me regardless of location. It wasn’t until the morning of my birthday two days later that I even began to think about this list. I sat on the fresh powder at the top of the mountains at Winter Park, over 12,000 feet above sea level. I looked out at the Rocky Mountains, my view allowing me to see for miles and miles. These are the environments that lead to my most spiritual moments; which is why I hike, camp, travel, and explore. In these moments, there is plenty of distraction available, yet a clarity of mind mixed with absolute awe. As I sat, a very simple yet significant phrase entered my mind.

And in that moment I knew that this would be the guiding light for the list. 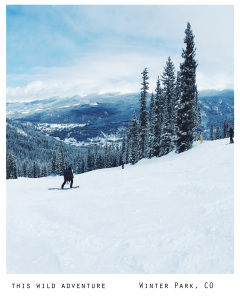